In a nod to these long, hot summer nights, we’re taking to the air this Fauna Friday and peeking into the secretive, nocturnal world of Australia’s microbats. Bats rank second in diversity in the mammal world after rodents, and there are approximately 60 species of microbats in Australia. Bats are in the zoological order Chiroptera, which contains two subgroups differentiated by size and use of echolocation: the larger Megachiroptera (e.g. fruit bats) and Microchiroptera the smaller microbats -bats that are rarely more than 170g in weight, mainly insectivorous and use echolocation to navigate and forage.

Like humans, bats are placental mammals, giving birth to live young and nourishing their young with milk. They are also unique in that they are the only mammals capable of sustained flight (as opposed to our marsupial gliders). The bones in bats’ arms and fingers are elongated to support the thin skin-like membranes that facilitate flight – they literally fly with their hands!

Echolocation involves the microbat emitting a series of high frequency sound pulses that reflect back a 3D “sound map” of the surroundings, which the bat uses to navigate in the 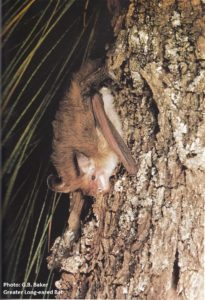 dark and hone in on their insect prey at night. Each species has its own unique pattern of ultrasound pulses, which zoologists can record in the field, convert to a frequency graph and identify the bat species by their individual echolocation calls. Microbats are so adept at echolocation, researchers have observed some species catching over 1000 insects in one hour!

Microbats roost during the day in tree hollows, under peeling bark, in amongst rock crevices or caves and may even utilise built structures (e.g. sheds, under eves and bridges and in roof cavities). Due to their small size (body length ~6-7cm), some species roost communally, huddling together to stay warm during the cooler months.

Strongly clawed feet and specialised tendons allow the bat to hang upside down for hours while keeping their leg muscles completely relaxed. Their small size and weight also means that gravity does not affect blood flow during their favoured inverted resting pose!

Some microbat species occurring in WA’s south west include the Greater Long-eared Bat (pictured), Lesser Long-eared Bat, Chocolate Wattled Bat, Gould’s Wattled Bat and Little Mastiff Bat. The loss of large, hollow-bearing trees is an ongoing threatening process affecting microbat populations. You can lend these flying mammals a hand by retaining old, mature trees on your property, or if your block is large enough, consider installing a bat box like the ones pictured below, erected at Samphire Cove Nature Reserve in Halls Head earlier this year. 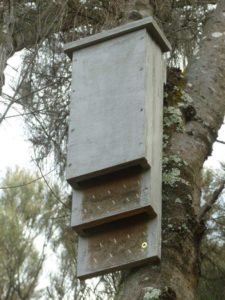