A conundrum of Corvids…

While I’m out leading my walking tours, I often get asked if the large black birds that we frequently observe are crows or ravens and what is the difference. Love them or loathe them, today’s Fauna Friday is the Australian Raven. Hopefully if you’re in the latter camp, you may gain some appreciation for these intelligent creatures after reading on… 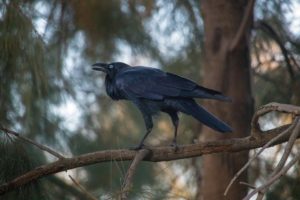 Crows and ravens are in the family Corvidae. Australia has three crow species and three raven species (one, the self-introduced House Crow (Corvus splendens) from the northern hemisphere, is considered an “accidental arrival” and is not established in Australia).

All are fairly similar in size and colouration, however species identification can sometimes be aided by noting the call, behaviour and – because of the separate ranges of different species – the location of your observation. Corvids also have longer feathers on their throat called throat hackles, which they puff up when they call and these are notably longer in the Australian Raven. If you are really keen and in areas where species distribution overlaps, check the colour of the base of the feathers on the head and neck when they are ruffled in a strong wind, as crows have white, while ravens have grey.

Ravens really do get a bad rap. Like the distasteful collective noun “a murder of crows”, a group of ravens is ominously referred to as an “unkindness” or “conspiracy of ravens”.

The Australian Raven is mainly carnivorous eating small mammals, other birds, eggs and carrion, but will also consume grains, fruits and insects and refuse. They are a particularly patient and efficient hunter of the defenceless (think ducklings following their mum in a line to the water) and perhaps this is why they have earned such a bad reputation. However as with any species, their role in the ecosystem is an important one, preying on the sick and weak and keeping the gene pool strong.

An Australian Raven’s intelligence and capacity to learn, plan ahead (e.g. hiding food in caches for leaner times) and problem solve through observation is impressive -I have heard stories from fellow field zoologists who have had to stop nest monitoring surveys of threatened bird species (or at least their route between nests) if an Australian Raven is in the area, as they learn to follow the researchers, find the nests and predate the chicks.

Hikers will also attest to ravens learning how to undo zips on packs. Australian Ravens have been known to wait around campsites or designated rest areas for hikers to have a break and leave their pack unattended. They then specifically target the small outer pockets as they have learned these ones often house packets of trail food usually kept in easy reach for the hikers! 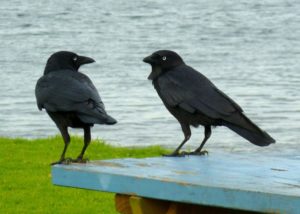 Australian Ravens mate for life, strengthening their pair bonds through allopreening (preening the other partner’s head and neck feathers). They build an untidy bowl or platform of sticks for their nest in the upper canopy of tall trees. Both the male and female will build the nest and tend to the chicks, however only the female incubates the eggs. They usually raise one brood annually.

So I hope this clears up a common conundrum of Corvids! I reckon our Australian Raven is often unfairly maligned, so I propose a new collective noun for such an intelligent Corvid – “a faculty of ravens”…